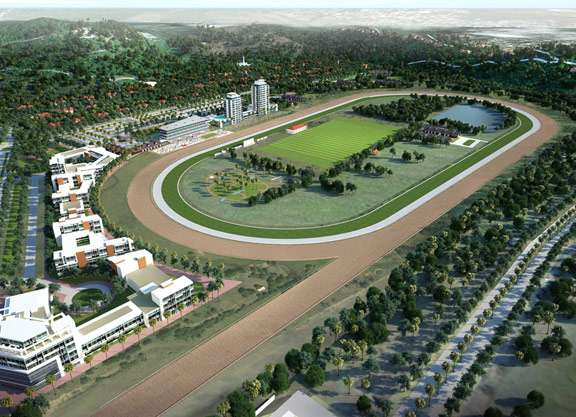 The island of Saint Lucia is set to launch its very own thoroughbred racing industry, just in time for its National Day on December 13th.

Thoroughbred racing will officially launch in Saint Lucia beginning Dec. 12 with the launch of the 2019 Caribbean Equine Cultural Festival, a luxury lifestyle and racing entertainment event at the Royal Saint Lucia Turf Club.

The event will hold its Race Day on Dec. 13, with the first Pitons Cup, billed as the “richest run” in the Caribbean this year.

Saint Lucia tourism officials say the Pitons Cup is drawing interest from across the region and abroad, with confirmed participation from both the United States and Australia.

That will include Hall of Fame trainer Todd Fletcher and Eclipse Award winner Sol Kumin, among others.

The project is the first major phase of a broader project first launched in 2017 in Vieux Fort on the southern corner of Saint Lucia. That project is called the “Pearl of the Caribbean.”

It’s one of several major new projects in Vieux Fort, most notably the recent announcement of plans by Royal Caribbean and Carnival to build a new cruise ship destination in the town.

For more, visit the Pitons Cup.

The Royal St. Lucia Turf Club (RSLTC) took the next step towards its Dec. 13 grand opening earlier this week with the arrival of 40 Thoroughbreds from America.

The delivery of the horses via an IRT plane (international transport of horses) was unlike anything the Caribbean nation had ever seen and brought chills to many witnesses.

“What most people didn’t think would happen is happening,” St. Lucia Prime Minister Allen Chastanet said. “The track is here, the horses are here, the facilities are ready to go.”

A press conference was held at the new track to give the media a chance to tour the facility and learn more about the upcoming race day, which will be headlined by the $150,000 Pitons Cup. The horses were still in the track’s quarantine facility, but were available for viewing on a live stream during the event.

“The Caribbean Equine Cultural Festival will be the region’s first lifestyle and racing event,” said Eden Harrington, RSLTC Director and China Horse Club Vice President. “It will commence on Thursday, the 12th of December with an investment and welcome party before moving to the National Day with CECF Race day.”

The majority of the horses are un-raced 3-year-olds purchased by the Royal St. Lucia Turf Club at last year’s OBS June Sale, but there are a few older horses mixed in as well. The group has been in training with Brandon and Ali Rice at Rice Horse Stables in Florida as they prepared for their journey to St. Lucia and each horse is for sale at a flat fee of $20,000.

“Brandon and Ali Rice are third generation horsemen and were chosen because of their excellence to prepare the horses for training and travel,” Harrington said. “These horses have been sourced out of the U.S. and have been trained for over a year at our expense. They are being supervised by two top vets and trainer Deon Visser. It is not our intention to make a profit on these horses. It is our intention to introduce St. Lucians to horse racing.”

The RSLTC’s goal is not just to introduce St. Lucians to horse racing, but also to educate them and provide them with job opportunities in the Sport of Kings. This was the main goal of St. Lucian native Winston Trim, who worked tirelessly for decades to bring racing to his native land.

A lifelong horseman, Trim spent several years studying American racing under New York-based conditioner Robert Barbara. He had spent most of his adult life trying to bring his dream of an international horse racing facility in St. Lucia to life and finally achieved it with the help of the China Horse Club’s Teo ah Khing.

Unfortunately, Trim passed away after a motor cycle accident in March of 2017, so he will be not be there to see his dream become a reality. However, his brother Kirley Trim will be working at the facility and his family was on hand for the media event, where Winston Trim was given plenty of recognition.

“Winston had this dream and he followed it up,” Chastanet said as he took to the podium to address the group, while Teo and Trim’s family looked on from the front row. “That is the unique part because all of us have dreams, but how many of us have that go-getter attitude of thinking that dream could actually be a reality. He did his research and tracked down Teo ah Khing and it can’t be easy to find him. When you do find him, he is so busy, holding him steady even for a minute to be able to convince him to even come to St. Lucia is a hard task.”

The RSLTC has started an initiative appropriately named the Winston Trim Training Program to educate and train St. Lucians as grooms, exercise riders, jockeys, trainers, etc. The internationally accredited training program’s first wave of participants were trained in the skills necessary to be a racetrack groom. The first graduates were present at the event and have been helping to care for the 40 American horses since their arrival on the island.

“The Winston Trim Training program is an ongoing initiative. It is not a one-off exercise,” Harrington said. “It is a road to greater opportunity and self-fulfillment. It is named after the late Winston Trim, who was instrumental in bringing horse racing to this nation. This initiative has been approved by the government of St. Lucia and is supported by the Royal St. Lucia Turf Club and its affiliate the China Horse Club. Anyone wishing to support this program should know 100% of the donations go straight to the program.”

He continued, “The Winston Trim Training program is an umbrella title and we want everything under that in recognition of Winston and his mentality of trying to use horse racing as an opportunity for employment for St. Lucians that he didn’t have here.”

The RSLTC also aims to help St. Lucians move into other roles surrounding the racetrack, such as veterinarians, stewards, administration, etc. The club currently has top professionals in their fields from around the world, such as Director of Integrity David Loregnard and COO Robert Butcher.

“We are all replaceable here,” Harrington said. “That is the intention. We are not all meant to be here long term. This is a long term investment, but we have to put the right pieces of the puzzle in place. Today has been five years in the making. The importance of St. Lucians being involved from the very first opportunity is immeasurable. More than 200 additional St. Lucians are predicted to be employed on CECF race day, mostly from Vieux Fort and surrounding areas.”

Trim will also be remembered on the inaugural race day with a sprint race named in his honor. The RSLTC hopes to turn the Winston Trim Memorial Trophy into a premier international sprint event. The purse currently stands at $40,000, but the club plans to build it in the future.

Christie DeBernardis is a full-time staff writer for the TDN and does occasional freelance work for the RSLTC’s affiliate China Horse Club and was at the RSLTC at its invitation. Extracts from-Thoroughbred daily news. October 2019